Join Mayor Reed Gusciora, friends, neighbors, and a colorful cast of reenactors as they usher in the New Year with one of Trenton’s favorite traditions. On Saturday, December 31, at 4 pm, attendees will gather at the Historic Iron Bridge in Mill Hill Park. The event starts with the Continental Army’s March from the Old Barracks to Mill Hill Park. Upon arrival, demonstrators will fire their muskets and demonstrate drills open to public participation. Next, attendees can enjoy hot chocolate, holiday cookies, and music as they watch our nation’s history come to life. Then, as darkness falls over the city, Continental Soldiers will light up the south bank as they present a dramatic reading of Thomas Paine’s “The American Crisis.”

“The American Crisis” is one of Paine’s most famous bodies of work. The series of pamphlets was published throughout the Revolutionary War, with installments beginning in 1776 and concluding in 1783. Paine advocated for American self-governance and independence against British forces in these pamphlets. The pamphlets were a source of inspiration and meaningful discourse during a period when the country faced great uncertainty. These articles were so inspiring that George Washington read the first pamphlet to Continental troops at Valley Forge.

Forever enshrined in our city’s history, the signage at Mill Hill Park now reads, “On this site, late in the afternoon of January 2, 1777, General Washington’s ‘Little Band’ of determined men and boys won the second Battle of Trenton. Having amassed a great concentration of artillery and small-arms power, the Americans withstood three powerful charges by the enemy and exacted a heavy toll in killed and wounded. This stand enabled the Americans to outflank the enemy during the night and march on to another victory at Princeton, thus completing the ten days that kept a dying Revolution alive.”

If you want to follow in the footsteps of some of our nation’s most prominent figures, you will not want to miss this historic sojourn. This event would not be possible without the support of the City of Trenton’s Department of Recreation, Natural Resources, and Culture. If you have any questions before the event, please get in touch with the Dept. of Recreation at (609) 989-3369 for additional details. With a chance to travel back in history, your imagination at the Assunpink Firewalk is sure to be ablaze! 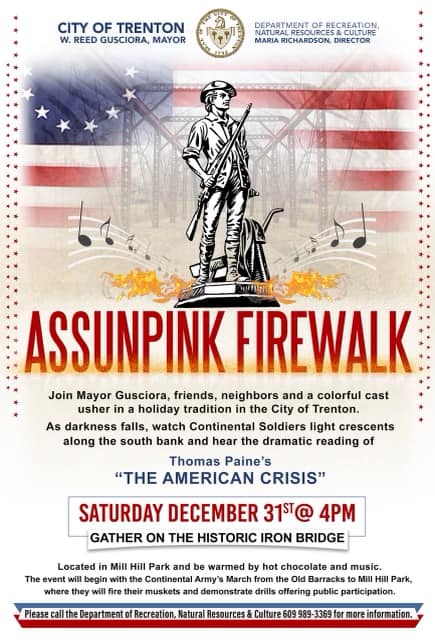