1911 SmokeHouse BBQ is celebrating its 6th year anniversary on Front Street with Smoketoberfest happening this Saturday, October 2nd from 3 to 10 p.m. on Front Street in Trenton. The event will feature guest DJs like All-Purpose, DJ Qwest, Mike Music, and others! 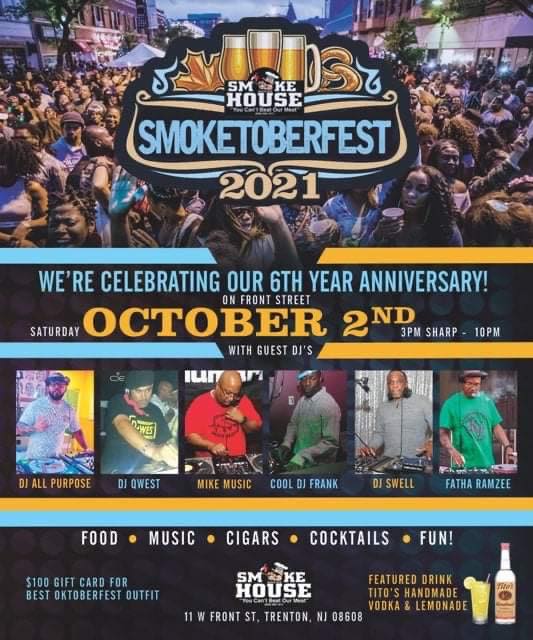 “We like beer, we like to barbecue, and it’s our anniversary,” explained Reggie Hallett, Executive Chef of 1911 SmokeHouse BBQ. Hallett notes that during the event, they are going to reveal their newest renovations to the restaurant on Front Street. “Our back patio is fully covered and it’s called a four-seasons room that we can open and close..so we’re gonna do the revealing and let people see that,” Hallett said.

1911 SmokeHouse BBQ is the brainchild of Maurice Hallett, Reggie Hallett’s brother. Reggie Hallett said he had moved out of Trenton to cook professionally up until six years ago when, at the beginning of August, he received a call from his brother. “(Maurice) called me, asked me what would I do if he bought a restaurant, and I said, well, I guess I’m coming home,” Hallett said. “We open two weeks later… and it’s it has really been history since then.”

The number 1911 is a nod to the Divine Nine collaborative umbrella council composed of historically black fraternities and sororities that Maurice Hallett is a member of.  The year is a reference to when the organization was founded in 1911 and a calling card to everyone in the know that this is a place for them.

“People come from all over that are familiar with those fraternities and they come to visit…We get people from all over the world that are either Kappas or Qs… They all come here just because of the 1911 and then of course they hear that we have great barbeque,” Hallett explained.

Hallett noted that although it’s a street-closing block party, it will be family-friendly throughout the night. “We’re family-friendly. It’s not just for adults. It’s always amazing to me to see kids out dancing in the street… they don’t get that nowadays, so that’s what makes me smile when I see a bunch of kids dancing to the music; hanging out with their family. I think it’s a great time. It’s all about bringing a community together.”