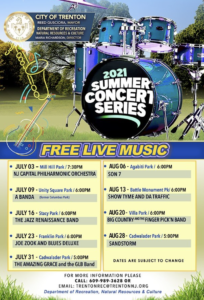 There are seven more concerts left in the 2021 Summer Concert Series in Trenton to attend. Various sounds of blues, jazz, county and more will play at the many open city parks including Stacy Park, Franklin Park, Cadwalader Park, Agabiti Park, Battle Monument Park and Villa Park.

Don’t miss your chance to attend one of the many free events. For more information about the 2021 Summer Concert Series, call (609)-989-3628 or email trentonrec@trentonnj.org.