It’s been about 30 years since the iconic Trenton shop R. Giaquinto Shoe Repair changed up its appearance. After organizational team work and a couple of installation days last week, the store is now looking fresher than ever with some revamped storefront signage made possible through Trenton Downtown Association (TDA), the City of Trenton and Greater Trenton. 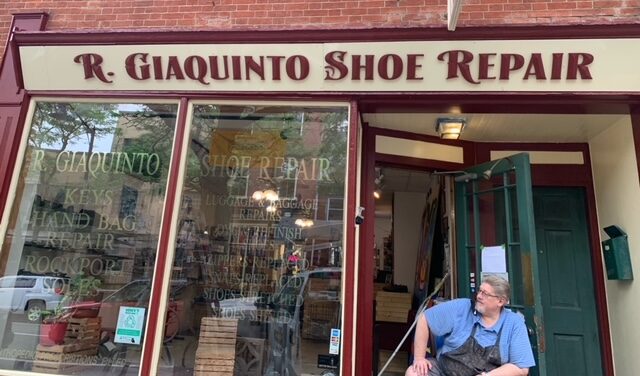 R. Giaquinto Shoe Repair, located at 115 South Warren Street, has been in business for a very long time. The trade started back in 1947 when the original R. (Robert) Giaquinto bought his own shop on Front Street in Downtown Trenton. Today, his son, Robert Giaquinto, continues to carry on the family legacy of fixing and repairing soles for all walks of life in Trenton.

“I service not only state workers, federal workers and city and county, but also the neighborhood,” said Giaquinto. “They all know me over here.”

That is, in fact, true. Ask any long-term Trentonian how they keep their nicest shoes looking brand-new, and chances are it’s with the help of R. Giaquinto Shoe Repair. That is why the Trenton Downtown Association (TDA) and Greater Trenton partnered up and stepped in to give back to the shop that has been giving to the capital city for decades.

“It’s fantastic that the City, TDA and George (George Sowa, CEO of Greater Trenton) there helped me out with that. It’s humbling that they took care of me like that.”

Greater Trenton provided a bridge loan for the signage through its Businesses Helping Businesses program in conjunction with the City of Trenton and TDA provided funds through its Façade Improvement Grant Program.

After 30+ years of wear and tear, the original signs were too aged to salvage. “[The sign company] had to redo the entire sign because my old sign was kind of rotted and falling apart,” said Giaquinto.

According to Giaquinto, his original signs with forest green lettering and brick red boarders were built and designed by the same creators who made the Six Flags Great Adventure signs in the 1990’s. Although unsure, he believes they were originally made in Jackson, New Jersey.

The newly manufactured signs were made in the heart of the capital city by the Trenton-based sign company Zienowicz Sign Co. With these new signs, Giaquinto opted to keep the signs similar in style in color. The new signage is simply a fresh take on the classic look. “They’re more of an up-to-date version of what I had,” he said. “The lettering looks better, the colors look better, etc.”

On the smaller storefront sign, the one that dangles above the entry way, there was a carved image of a man cobbling shoes on a work bench. The image was pulled from a poster Giaquinto has hanging on the walls of his shop. When these new signed were built, the designers were actually able to restore the working man from the original sign and include it in this new, updated sign.

“They saved my carved man and install that on the sign,” said Giaquinto. “They did a hell of a job. It’s beautiful!”

As a Trenton native with strong roots in the community, Giaquinto has seen a number of stores in the capital move in and out. However, with his new, bright signage and fresh storefront, he hopes the city knows this is his home, and he doesn’t plan on leaving any time soon.