The Old Barracks Museum Re-Opens To Visitors on May 4

The gates at The Old Barracks Museum are being reopened to visitors on Tuesday, May 4. Tickets to see the National Historic Landmark must be pre-purchased online at www.barracks.org at least one day prior to visiting. Masks are required to be worn by visitors, staff, and volunteers at all times.

Visitation is limited to one group of no more than 10 people at a time to comply with the State of New Jersey’s mandate on capacity reductions. The museum will be open Tuesday through Saturday. Visitation policy and hours are subject to change. Visit www.barracks.org for the most current guidelines. Reservations will go on sale beginning April 27, 2021. 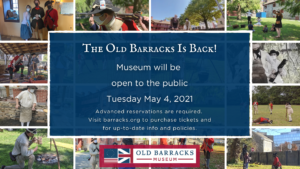 The Old Barracks Museum welcomes visitors to see this historic building, which dates back to 1758 when it was used as winter quarters during the French and Indian War. During the American Revolution, it stood witness to the Battle of Trenton and served as a military hospital to provide smallpox inoculations. Visitors will meet with 18th century tradespeople who showcase the skills required for army life as well as tour the gallery on the history of New Jersey in the French and Indian War, see the bunks where soldiers slept, tour the Officers’ House, see a medical room, and experience the thrill of a musket firing. Afterwards, guests can visit the Quartermaster’s Shop for souvenirs as well as items from local artisans.

Although most visitors associate the building with the Battle of Trenton, the site is no stranger to the history of disease control. Following the famous battle on December 26, 1776, General George Washington designated the barracks as a military field hospital to specialize in the inoculation of soldiers with smallpox. This method of disease control was controversial for its time and pre-dated the discovery of the vaccine. Visitors will learn about this during their tour.

The Trenton landmark closed its doors on March 14 as a precautionary measure to help control the spread of COVID-19. While opening briefly during the Summer, it was necessary to close the museum’s doors once again in November. Since then, the museum has brought its programming to a virtual platform. A new online exhibits including, “When Women Vote: The Old Barracks and the

Anti-Suffrage Movement,”A Symbol of New Jersey to the World,” and the online exhibit featuring a Sampler Collection were launched. These online exhibits are available alongside “Necessary and Proper for the Public Good: How the American Red Cross and the Old Barracks Association partnered to contribute to the World War I effort at home” and “Collection Highlights.” Virtual programming has been available on the Old Barracks Museum’s Facebook and YouTube pages, including shoemaking demonstrations, a history of the Quartering Act, and an explanation of the clothing of middle-class women in the late 18th century.

During the Fall season, the Old Barracks was unable to hold in-person events, including the annual Tavern Night event. The staff worked together to create a fun and informative Telethon that is available for viewing on their YouTube page and helped to raise money to support the museum.

The financial impact of the closure of the museum has been devastating to the Old Barracks Association, the private non-profit organization that manages the historic site. Private donations have been made by the general public, but the loss of visitor revenue presents financial challenges. If you would like to make a donation to help ensure the Old Barracks Museum’s future as a historical landmark in New Jersey, please visit barracks.org/donate.