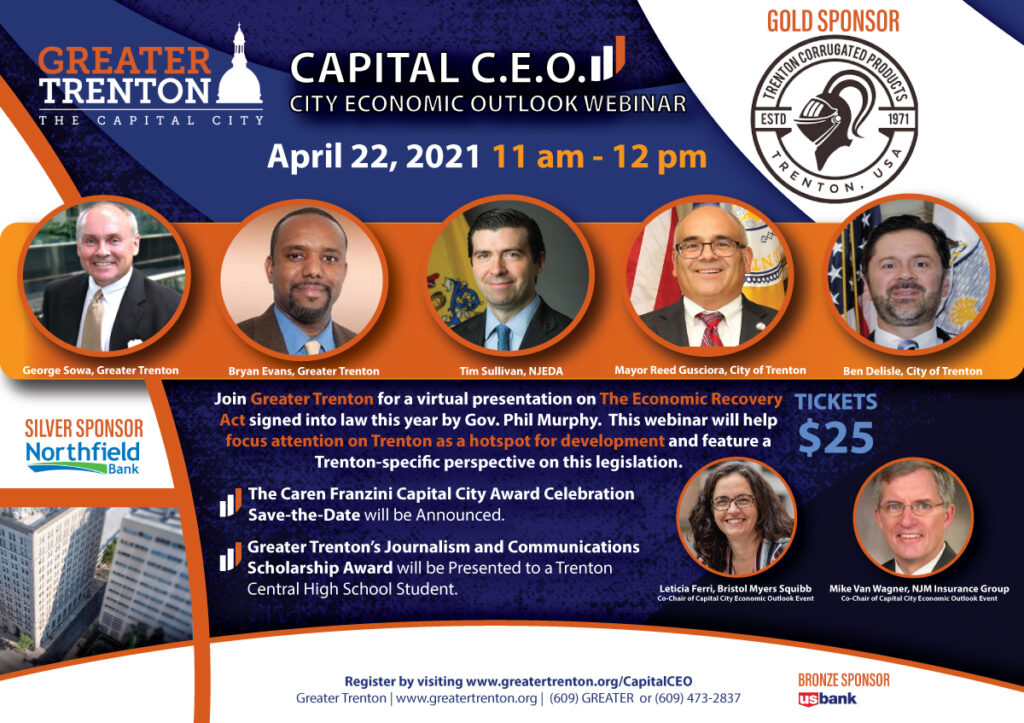 Signed by Governor Phil Murphy on January 7 of this year, the ERA is a six-year, $14 billion package divided into eight incentive programs intended to encourage job growth, community partnerships, property development and redevelopment, and many other economic development initiatives in New Jersey. Yesterday’s Capital CEO event presented a closer focus on the ways in which the city of Trenton will potentially benefit from this act.

“From the earlier days of his time in office, Governor Murphy has recognized the importance of a strong and vital and growing Trenton to the overall New Jersey economy,” said Tim Sullivan, CEO of New Jersey Economic Development Authority (NJDEA). “The work of the Economic Recovery Act recognizes, and really prioritizes, Trenton and a handful of other communities at the very top of the pile and at the top of the list.”

He continued, “All of the dials are turned up as strongly as they could be within the parameters of this bill to make sure Trenton benefits from this package in a way that, perhaps, it didn’t from prior approaches or incentives as much as it should’ve or could’ve. We couldn’t be more excited to be partnering with the mayor, his team in city hall, the council, Greater Trenton and others in Trenton to really make Trenton a success story from this package.”

The eight core incentive packages included under the ERA is the Emerge Program, the NJ Aspire Program, the Food Desert Relief Program, the NJ Innovation Evergreen Fund (NJIEF), the Main Street Recovery Finance Program, the Brownfield Redevelopment Incentive, the Historic Property Reinvestment Program and the Community Anchored Development Program. Each of these programs, as highlighted by Sullivan at yesterday’s event, holds the potential to dramatically benefit the Trenton economy while capitalizing on the momentum the city has in New Jersey’s overall economic standing.

Although different in terms of support, the eight incentive packages under the ERA equally follow five underlying principles for supporting the economic development of the city. Each incentive aims to support job creation, invest in innovation, provide relief for Main Street businesses, help underserved communities and implement anti-corruption and oversight reforms.

“We think the fire is hot for development in the Capital City,” said Mayor W. Reed Gusciora. “Trenton is a welcoming place for business, supporting job creation, innovation, revitalization of our downtown, and a place to lend a step up to our underserved communities.”

To highlight some of the ways in which the ERA has potential to benefit the local area, Greater Trenton’s CEO George Sowa and City of Trenton Economic Development Director Benjamin Delisle presented representative sites in the city of Trenton that have potential for growth, especially through the Emerge Program and NJ Aspire Program.  Sowa and Delisle detailed how the ERA would apply to each specific site and noted that ERA benefits would be available for other sites within Trenton that had similar attributes and characteristics.

“$1.4 billion annually in tax credits is shared between Aspire and Emerge over six years, so there are huge amounts of dollars being contemplated,” said Sowa. “The goal is to try and motivate developers, investors, businesses and others to look at Trenton differently, as a place to build, grow, live and invest.”

The ERA designates Trenton along with Atlantic City and Patterson as a Government Restricted Municipality (GRM).  “The Economic Recovery Act provides great benefits for GRMs like Trenton. It’s a great start, but there’s more that can, and should, be done,” said Sowa. “We want to make sure that we work together to review and revise the ERA to make it even more impactful for Trenton and the other GRM’s as a tool to benefit businesses and residents.”

Sowa said, “We’re happy to be a resource for anyone and everyone on the webinar and elsewhere to make sure we’re coordinating the comments and really emphasizing points that we would like to collectively see, and get back to the Economic Development Authority, legislators, the governor’s office, and city and county representatives who may be supportive of these changes.”

Coupled with a brief update on TrentonDaily by Evans, Ferri announced the save-the-date for Greater Trenton’s Caren Franzini Capital City Award Celebration happening on December 6, 2021 as well as this year’s honorees: Drs. George and Pamela Pruitt.

A link to the official recorded webinar will be available at www.greatertrenton.org on Monday, April 26th.