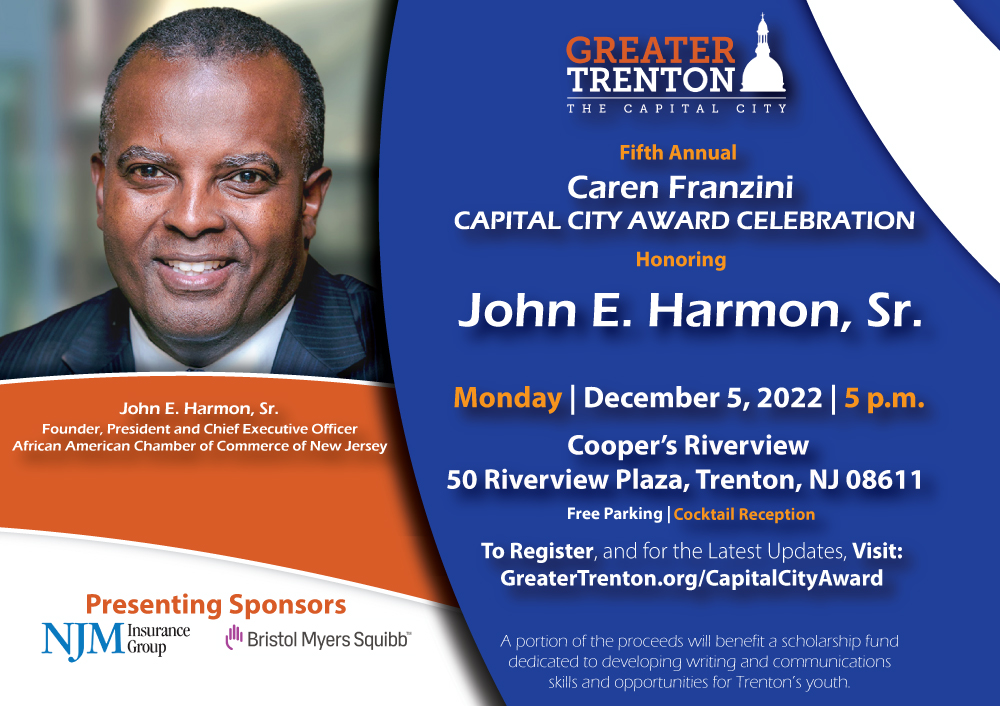 Join us on December 5, 2022 at 5 p.m. as we come together for an evening of cocktails and conversations to reflect on Trenton’s past, reimagine its future, and make connections with some of the most influential leaders impacting the Capital City.

The celebration will honor the legacy of Caren Franzini, former NJEDA CEO and one of the founders of Greater Trenton, by presenting the Caren Franzini Capital City Award to John E. Harmon, Sr., Founder, President and Chief Executive Officer of the African American Chamber of Commerce of New Jersey

For information on how you can join the effort to memorialize Caren’s extraordinary leadership while helping Greater Trenton reboot, refresh, and reinvigorate our Capital City, please reach out to Bryan Evans at bevans@greatertrenton.org or call 609-473-2837 x102. 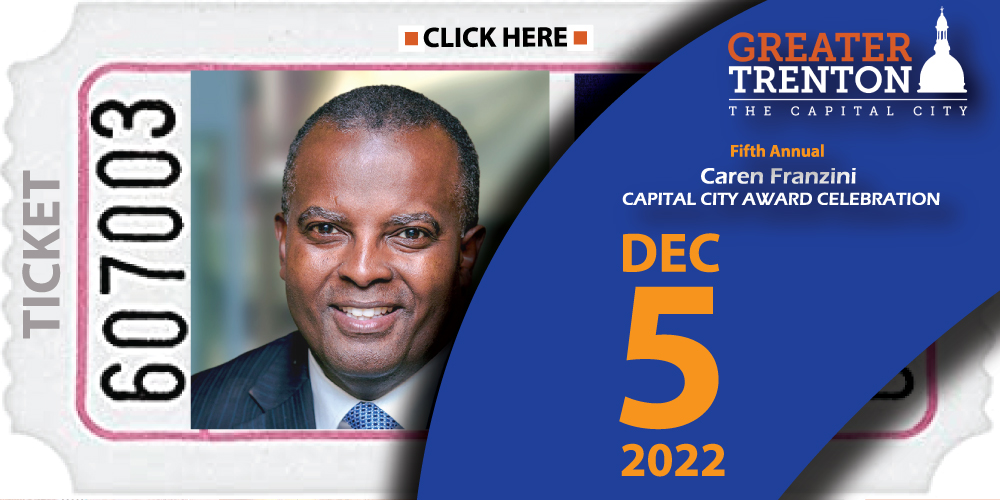 “Presented by” title signage on all promotional materials 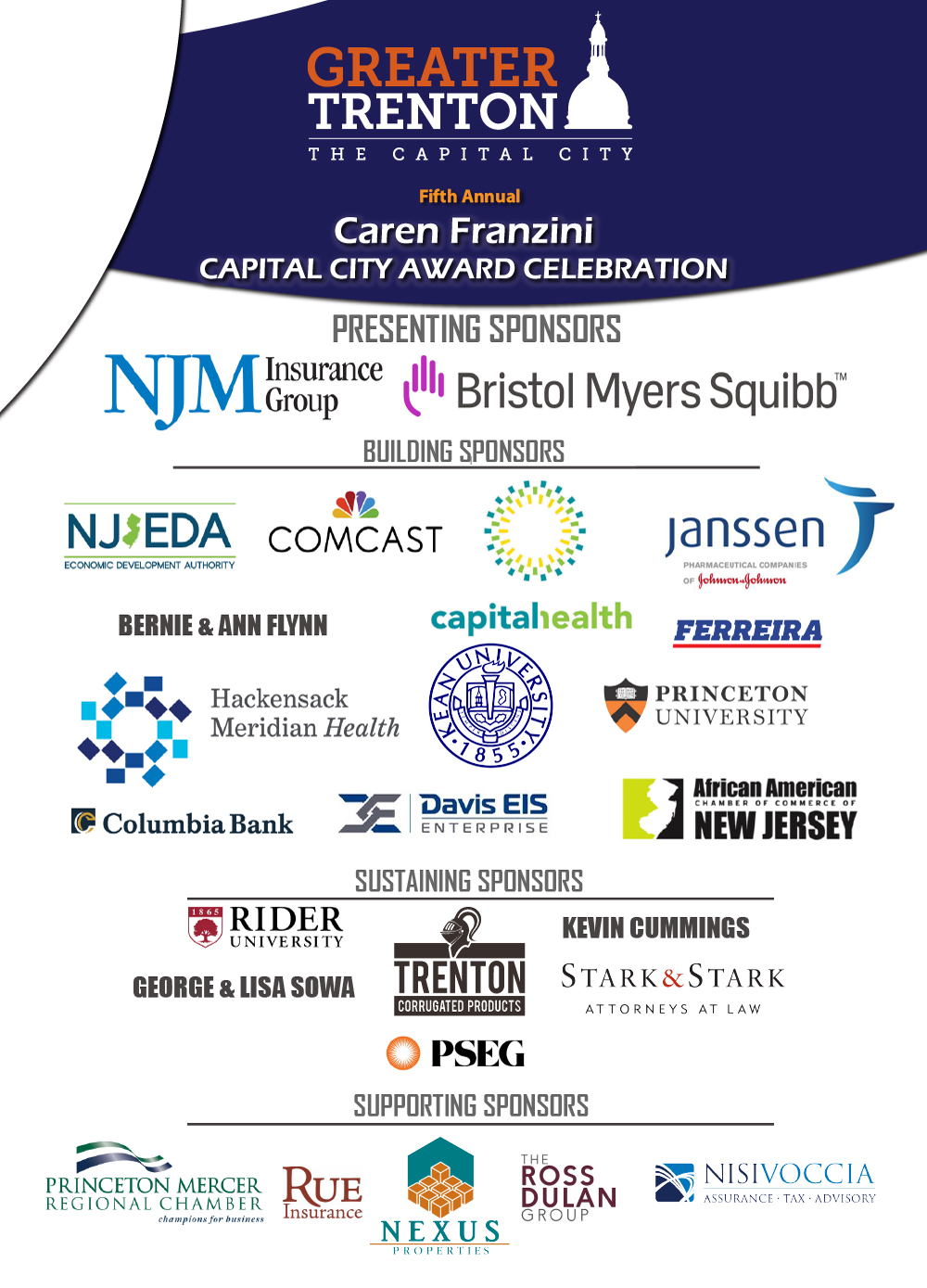 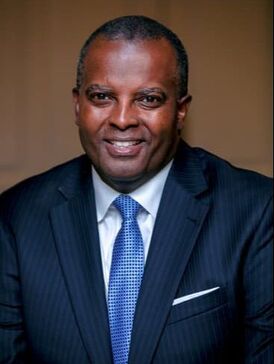 John E. Harmon, Sr. IOM has served as the Founder, President and CEO of the African American Chamber of Commerce of New Jersey (AACCNJ), since 2007. In this role he has the responsibility of establishing, implementing and executing the mission, as well as the fiduciary oversight and governance of AACCNJ in accordance with its Bylaws. In addition, he works to identify strategic partnerships in both the public and private sector to connect AACCNJ members and supporters to resources and opportunities to grow and sustain their goals and objectives. Moreover, Harmon serves as an advocate on behalf of the 1.1 million African American residents and the over 70,000 black owned businesses statewide to ensure that policy at the municipal, county, and federal level provides fairness, equity and access to a level playing field in the market place.

Harmon is the former President and CEO of the Metropolitan Trenton African American Chamber of Commerce (MTAACC). Under his guidance, MTAACC grew its membership substantially, forged alliances with business associations/organizations and government, and forged strategic partnerships in the public and private sectors to benefit African American businesses throughout New Jersey.

John Harmon is a Board Member and the Former Chairman of the Board for the National Black Chamber of Commerce; there are 150 Affiliate Chapters of the NBCC and over fifteen international affiliates. Harmon was recently appointed to the US Chamber of Commerce – Board of Directors, the Federal Reserve Bank of Philadelphia’s Economic Community Advisory Council (ECAC), Investors Bank Board of Directors, Hackensack Meridian Health Board of Directors. Harmon is also a Board Member of Digital Place Based Advertising Association, and is a member of the US Chamber of Commerce Committee of 100. ​He is the Founder and Chairman of the New York State Black Chamber of Commerce (NYSBCC). Additionally, Mr. Harmon is a Board member of the New Jersey Chamber of Commerce (NJCC), New Jersey BPU, Supplier Diversity Development Council (SDDC), Opportunity New Jersey, Chairman of Crime Stoppers of Greater Trenton and a former Board Member of the American Chamber of Commerce Executives (ACCE), First Book, Minding Our Business (MOB), a youth entrepreneurial initiative in affiliation with Rider University.
Harmon was recently acknowledged by Return on Information-New Jersey (ROI), as the Number 1 Person of Color in New Jersey. Harmon was also acknowledged in South Jersey Journal’s list of the “Twenty-five Most Influential African Americans in New Jersey”, for the third consecutive year. Harmon was selected for ROI-NJ “2018 Power List of Influencers. Harmon is also recognized as a Center of Influence (COI) for the United States Army and was recently selected as a participant in the Joint Civilian Orientation Conference (JCOC) hosted by the Secretary of Defense. The JCOC program is the oldest and most prestigious public liaison program in the Department of Defense. Harmon was selected as one of 40 individuals (out of 230 applicants) to attend JCOC18. In addition, Harmon was the only attendee from the State of New Jersey. Harmon was recently selected to NJBIZ2018 Power 10. The criteria for selection to the Power 100 were: Identify the people impacting business in New Jersey in a positive way whose primary mission is to foster growth in the state. Harmon was the first individual selected as a member of the host committee for NFL Super Bowl XLVII held in New Jersey 2014.

Mr. Harmon holds an associate degree in Business Administration from Mercer County Community College and Burlington County College, and holds a bachelor’s degree in Business Management, Fairleigh Dickinson University, 1983. Mr. Harmon also successfully completed a one-year Fellowship on Regionalism and Sustainability sponsored by The Ford Foundation and completed the Minority Business Management Seminar at the University of WisconsinMadison, in 2009. Additionally, Mr. Harmon completed a four-year Chamber Executive Management Program, at Villanova University, sponsored by the U.S. Chamber of Commerce, in 2014. 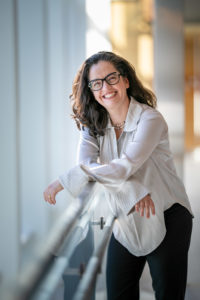 As the Executive Director, Medical Cardiovascular Business Development Strategy Early Assets and Cross-TA at Bristol Myers Squibb, Letícia brings a unique experience that spans from working as a physician in the pharmaceutical industry across different global markets such as Brazil, Canada, and the United States; as a physician scientist at the University of São Paulo and University of Toronto; and as a clinician specializing in Endocrinology and Internal Medicine.

Her career at Bristol Myers Squibb started in 2010 in Brazil. Later she was working in BMS Canada and since 2013 she has been in New Jersey working across various functions on medical affairs teams at BMS.  She currently lives in Skillman, NJ with her husband, Mauricio, and daughter, Valentina. Leticia has been appointed as the full time lead for OLA at BMS in June 2019. 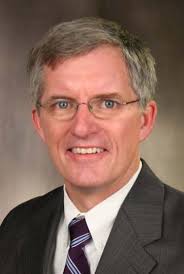 Mike Van Wagner is the Vice President of Public Affairs for NJM Insurance Group, one of New Jersey’s leading property/casualty insurers, and a company recognized throughout the region for its outstanding service to policyholders. As a company that operates in a mutual fashion, NJM has paid dividends to policyholders – not stockholders – for more than 100 years, for a total of over $6 billion. NJM employs approximately 2,500 people with offices in West Trenton, Parsippany and Hammonton. A 38-year veteran of NJM, Mr. Van Wagner has served in a number of roles including leadership positions in Underwriting, Marketing, Communications, Government Affairs, Corporate Giving and Reinsurance. From May 2012 to October 2013, he served as Executive Director of New Jersey’s Business Action Center (BAC), requiring an 18-month leave of absence from NJM. While at the BAC, Mr. Van Wagner oversaw a veteran team of economic development professionals helping companies stay, grow, or locate in New Jersey. In 2014, he was recognized by NJBiz as one of the “Top 100 Business Leaders in New Jersey.” Mr. Van Wagner shares his experience and expertise with a number of nonprofit and leadership organizations. These include Lead New Jersey, where he served as Chair and now serves as Board Member; HomeFront as Board Member; the Morris County Chamber of Commerce as a member of its Business Cabinet; the Boys & Girls Club of Mercer County as a Trustee; Greater Trenton as a Board Member; and New Jersey Audubon as Board Member. He is also a member of the Glendale Civic Association, and the Ewing Township Recreation Commission, as well as a member of the Mooch Myernick Soccer Foundation’s Board of Directors.

Greater Trenton is an independent 501(c)(3) nonprofit that uses private funding and a network of collaborative relationships to advance economic revitalization efforts in the state’s capital city.