The City of Trenton is thanking everyone who submitted feedback via www.TalkTrenton.org. There has been a high level of engagement on the American Rescue Plan, with more than 80 suggestions from City residents and business owners. The City asks to please keep the suggestions coming! 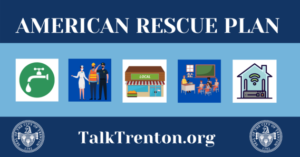 As Trenton analyzes this feedback, they’re also determining which suggestions fall into the eligible expenditure categories identified by the U.S. Department of Treasury.

Some of the comments suggest that Trenton invest in low-cost broadband options, youth recreation and after-school programs, jobs and scholarship programs for all ages, and facilities upgrades for historic properties and community centers. The first draft of the plan already includes several of these elements, but the City will assess the recent feedback to determine whether the proposed programming meets the needs of the community.

Other suggestions, such as additional compensation for first responders, have already been implemented, with those payments received by essential workers on July 8.

Some suggestions, while wonderful proposals, according to the City, are not expressly eligible spending categories, such as cutting taxes. Other ideas, however, can be adapted to include eligible projects. The City reassures that they are taking every suggestion and reviewing it to see whether it can be modified in order to be an eligible expense.

For example, while they may not be able to use the funds to open and staff additional library branches, those dollars can be used to invest in the main Trenton Free Public Library branch’s current needs, such as HVAC upgrades for COVID compliance, expanded youth and adult programming, jobs training and technology improvements. Also, while the City can’t build a new community center on a vacant lot, they can invest in existing properties to serve as a site for recreational activity, a health or vaccine clinic or other services related to COVID-19 needs.

Other suggested programs and initiatives are either already in the works or can be funded through other means. For example, the City already has the existing business loan programs for COVID-related expenses incurred by City businesses, but they are seeking to convert outstanding loans to grants and expand eligibility under the program. There is also already funding designated for the demolition and renovation of vacant and blighted properties. Other expenses, such as improvements to Trenton Water Works infrastructure, have been bonded out in part and may qualify for funding under a future infrastructure bill which the City is eagerly anticipating.

Some residents also suggested partnerships be forged with other entities who receive Rescue Plan funding, such as Trenton Public Schools, Mercer County and the State of New Jersey itself. The City of Trenton is in ongoing discussions with those and other entities to avoid duplication of programming efforts and ensure cooperation where necessary, such as in job readiness programs geared toward Trenton youth.

To give your input or to learn more about the American Rescue Plan, visit www.TalkTrenton.org