After playing deep into Sunday morning, the Bisons and IronPigs returned to Trenton Thunder Ballpark for their Independence Day series finale. On the best weather day of the six-game series, a season-high crowd of 5,791 made its way into the ballpark to celebrate the holiday and wasn’t deterred by an early 3-0 IronPigs lead. *T.J. Zeuch *delivered one of his best starts of the season and *Rowdy Tellez *homered in a 4-RBI performance as the Herd (31-21) won their third straight series with a 5-4 win. 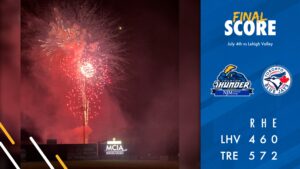 Zeuch was really sharp all night except for the top of the second, which turned the corner when *Ryan Cordell’s *comebacker hit off Zeuch and caromed off Tellez near first base for an error. On a 2-2 pitch, *Darick Hall *served an opposite field double to left for a 1-0 lead and two batters later it was *Logan Moore *making it 3-0 with his first home run of the season. Zeuch only allowed one more hit after the second and saw his earned run average drop to 3.81 over five-plus innings as he struck out five IronPigs for the second time in the series.

Tellez had the only hit off ‘Pigs starter *Chase Anderson *when he hit a booming single off the right field wall to open up the second. In his second start of the series, the rehabbing Anderson didn’t allow another baserunner over his three scoreless innings while mixing in three strikeouts. Lefthander *Tyler Alexander *picked up the slack with a perfect bottom of the fourth in his IronPigs debut before the Bisons finally struck in the fifth.

Still trailing 3-0, *Richard Urena *got to third base on his tenth double and a groundout. A wild pitch brought him home and planted the seeds of the rally, which was completed during Alexander’s final inning in the sixth. At the top of the lineup, *Breyvic Valera *and *Alejandro Kirk *opened it up with singles to put the tying runs on base. *Kevin Smith *just missed a home run when he flied out to the left field wall, but Tellez didn’t miss when he mashed a 3-1 hanger to right for his third homer of the series and a 4-3 lead.

During his next at-bat in the seventh, Tellez pushed it to 5-3 with an RBI groundout after the Bisons loaded the bases on two walks and a hit by pitch. *Joel Payamps *(1-0) secured the last two outs for Zeuch during his debut in the sixth and *Patrick Murphy *worked a scoreless seventh in his return from Toronto. *Bryan Baker *picked up back-to-back strikeouts to close out the eighth, at which point *John Axford *came on in search of his second straight save. After walking the first two batters to put the tying runs aboard, *Dalton Guthrie *laid down a sacrifice bunt before *Nick Maton *made it a one-run game with a groundout. With the tying run just ninety feet away, Axford froze *Matt Vierling *for the strikeout to end it and send the Herd into the off day with a record of 31-21.

The Bisons and IronPigs return to Trenton Thunder Ballpark for another 6-game series to kick off a 12-game homestand beginning on Tuesday, July 13 at 7:00 p.m. To purchase tickets, call (609)-394-3300, Opt 4 or visit trentonthunder.com.